Here in Indiana, there are many species of nuisance wildlife. But when it comes to bats, they are at the top of the list. Bats are highly destructive to houses and buildings, and pose many health hazards as common carriers of several infectious diseases. There are three species of bat that are the most common nuisance bats found in Indiana, so if you have bats in the attic or house, it is likely one of these three species.

Continue reading to learn more about each species of bat native to Indiana, and how to safely get rid of them.

The Big Brown Bat is a member of the fuscus species, and most native to North America, the Caribbean, and even parts of Central America. As medium-sized bats, they grow up to 13 centimeters in length, and can weight up to 16 grams. Like the Little brown bat, they are also nocturnal, echolocating, and insectivorous. They roost during the day, usually in hollow trees, and hunt for insects at night. They are known as a nuisance bat in some areas, commonly taking refuge in residential and commercial structures like sheds, attics, crawl spaces, and more.

The little brown bats are among the most common bats found in North America. They are covered in shiny brown, sleek-looking fir, with a lighter patch of fir on their bellies. They are usually around 3 to 3 ½ inches in length, and weigh only a fraction of an ounce. Although small, their average wingspan is more than double their body length, generally between 6 and 8 inches. They can live up to 30 years or more, average between 20 and 30 years specifically.

Breeding season is generally around September and October, but females actually store the male sperm for springtime fertilization, making baby bats born in the summer. Gestation is generally 50 to 60 days, and once born, sexual maturity is reached between 6 and 8 months. Females generally give birth to just one bat pup a year, but sometimes two.

Mexican Free-Tailed bats are sometimes known as Brazilian Free-Tail bats, but also called Guano bats, because they produce large amounts of droppings. They are also incredibly fast at flying, reaching up to 99 miles per hour! In fact, they are now proven to be the fasted flying animal in the world, being 30 miles per hour faster than the fastest bird! Furthermore, they can fly higher than any other bat, at extremely high altitudes up to 10,000 feet. No other animal or human can survive this altitude because of the lack of oxygen!

As for their name, it is derived from their free-hanging tail that extends beyond their tail membranes. And they also have wrinkled lips, distinctive to their particular genus. When it comes to being a nuisance, Mexican Free-Tailed bats might be the most destructive since they form the largest colonies out of all other warm-blooded species. If you have an infestation of these in your attic, it can be a long and expensive renovation.

If you have nuisance bats, call 317-535-4605 to speak with a friendly and knowledgeable wildlife abatement specialist about Indianapolis bat removal services and solutions. Don’t let bats damage your property and cost you thousands of dollars in renovations! Let our DNR licensed and insured bat removal specialists provide the workable solutions you need.

Bats are fascinating mammals and play an incredibly important role in our surrounding eco-systems. Unfortunately, they have been pushed out of their natural habitats and forced into municipal areas due to land overdevelopment and similar human-motivated factors. As a result, bats are frequently regarded as pests, rodents, and nuisance animals. But the truth is, they are an essential part of our surrounding ecosystem, and they play an integral role in mosquito and insect control in our parks and backyards every night.

Rather than being frightened or turned off by bats, we need to be supportive of their survival; especially since there are many endangered and threatened species. 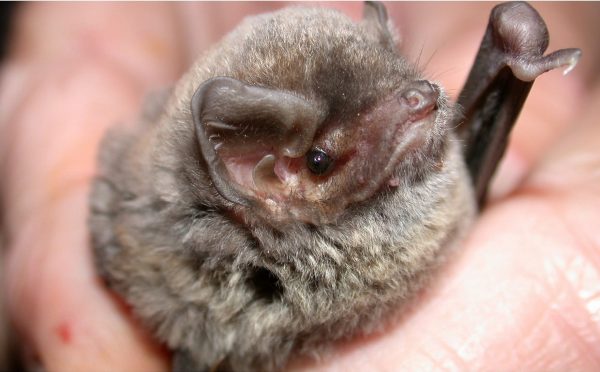 There are more than 1,200 known bat species around the world, and 30 known species in North America. Out of the 30 known bat species in North America, there are some that are listed as federally-endangered by the U.S. Fish and Wildlife Service. In this region that surrounds Indiana, there are 3 federally-endangered bat species that are currently protected by the Endangered Species Acts. These include the Gray bat, the Indiana bat, and the Virginia Big-Eared bat. All three species have interesting and unique attributes, and should be protected and preserved to the best of our abilities.

Gray Bat ⚊ The Gray bat, Myotis grisescens, has been categorized as federally-endangered for over 40 years. When they were added to the endangered species list, there were an estimated 2 million bats left around the world.

Indiana Bat ⚊ The Indiana bat, Myotis sodalis, is very tiny, making them difficult to distinguish from other species. In fact, they look very similar to the little brown bat (Myotis lucifugus), which can be dangerous since little brown bats are not federally-protected.

Virginia Big-Eared Bat ⚊ The Virginia Big-Eared, Corynorhinus townsendii virginianus, is most distinguishable by its large ears, which can reach lengths of 2.5 centimeters or more. Unfortunately, there are only about 20,000 left. Most remain native to West Virginia, while other populations are found in Kentucky and North Carolina.

Species of Bat in Indiana

There are twelve known species of bat commonly found in the state of Indiana. The 12 species of bat found in Indiana include the Big-Eared bat, Red bat, Southeastern Bat, Hoary Bat, Gray Bat, Evening bat, Northern bat, Silver-Haired bat, Little Brown bat, Big Brown bat, the Pipistrelle bat, and the popular Indiana bat. The Big-Eared Bat has mostly migrated out of Indiana, and is not regularly seen here in the state any more but still spotted in other areas. The same goes for the Southeastern Bat.

If you find a bat in the attic, house, yard, or other area of your property, it is strongly recommended to contact a local Indianapolis bat removal and control company for professional assistance. Never attempt to touch, trap, catch, or kill a wild bat. This means it is not a good idea to keep them as a pet either. Although bats are highly advantageous to our surrounding eco-systems by controlling mosquito populations and pollenating forests, they are also dangerous to humans and pets, and should never be handled by an untrained individual under any circumstances.